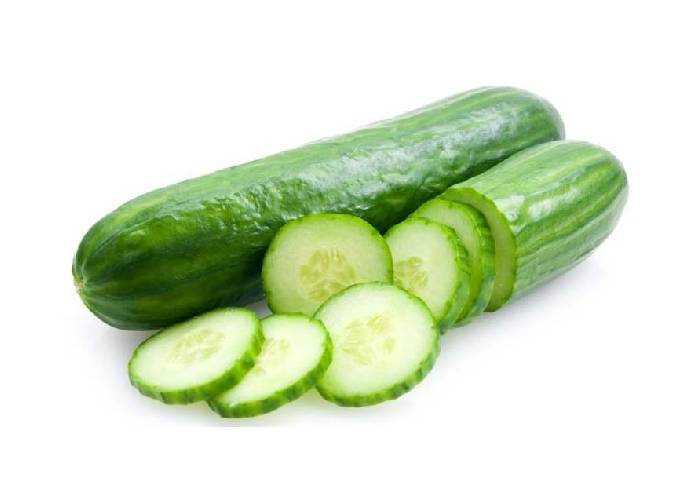 Good health is the real earned wealth, just get it with cucumber
While most people think of cucumbers as vegetables, they are actually a fruit. They contain seeds and grow from the ovaries of flowering plants. Cucumbers are members of the plant family Cucurbitaceae, which also includes squashes and melons.
Cucumber is a widely cultivated plant in the gourd family, Cucurbitaceae. The fruit of typical cultivars of cucumber is roughly cylindrical, but elongated with tapered ends, and may be as large as 60 centimeters long and 10 centimeters in diameter.
Cucumber health benefits includes reducing the risk of cardiovascular disease, healthy weight management, detoxifying the body, enhancing the skin, supporting eye health, alkalizing the blood and treating cancer. Other benefits includes combating bad breath, supporting digestion, controlling blood sugar level, maintaining adequate blood pressure, supporting bones, repairing hair, supporting nails and supporting dental health.
Botanical Name: Cucumis Sativus
Cucumber is a popular cultivated plant that managed to captivate our attention from the moment it appeared in ancient India. Since that pivotal moment over 4000 years ago, cucumber was spread beyond Indian borders, moved through Ancient Greece, Rome, Europe, New World, China, and eventually becoming the fourth most widely cultivated vegetable in the world.
Cucumber varieties come in pickling, slicing and "burpless" types. There are also "specialty" heirloom and greenhouse varieties of cucumbers. 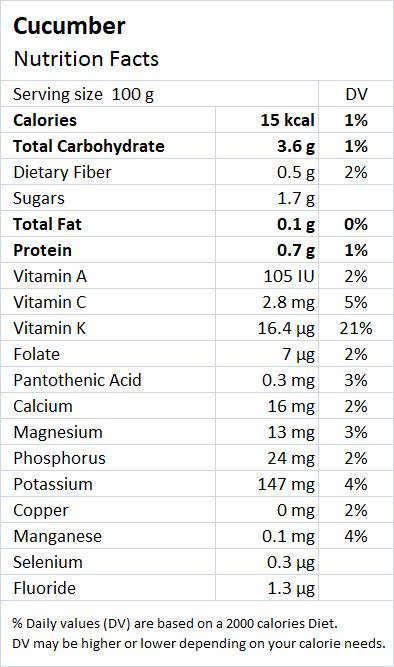 Reduce the risk of cardiovascular disease

Cucumber play an important role in maintaining a healthy heart with potassium and magnesium. Cucumber keep blood pressure under control.
Cucumbers also contain lignin, as an anti-inflammatory element that helps boost immunity and reduces all the risks of cardiovascular disease.
Cucumbers contain potassium, which lowers blood pressure levels. Cucumber makes proper balance of potassium both inside and outside the cells.
MAIN THING: Minerals like Potessium and magnesium found in cucumber and also anti-inflammatory properties lower the risk of heart diseases.

Cucumber moisturizes the skin around the eyes as because it contains 95% water. Vitamin A plays an important role in improving your skin, enhancing collagen production, acting as a natural and anti-wrinkle agent.
Hyperpigmentation forms dark circles around the skin of eyes mainly due to restlessness, cucumbers are the best option for it. The antioxidant present in the cucumber eliminates skin irritation. vitamin C in cucumbers lighten skin tone.
MAIN THING: Eating cucumbers on a regular basis helps enhance vision as it contains several anti-inflammatory and antioxidants that can help steer clear of cataracts.

Cucumbers are one of those foods which are high in fiber . The vegetable also involve an enzyme referred to as “erepsin”, which improves the process of digestion and helps the body adequately absorb protein.
Pectin in cucumber facilitates the normal flora of the intestine. It also manages the bowel movements and softens the stool due to its high water content, which helps treat constipation, gastritis, ulcer and many other stomach related disorders.
MAIN THING: Fibers and enzymes in cucumber help to improve digestion.

Cucumbers help the liver to remove impurities, waste, and also helps completely eliminate accumulated toxins from the stream and gut. It also helps the body to pass out more urine in order to remove toxins.
MAIN THING: Drinking cucumber beverages speed up the detoxification process.

Cucumbers contain fisetin, caffeic acid, cucurbitacins, lutein, which have the capability to reduce cancerous symptoms at the early stages.
It prevents breast, ovarian, prostate, uterine and lung cancer due to the presence of flavonoids such as fisetin and caffeic acid.
MAIN THING: The phytochemicals in the vegetable have strong anti-cancer properties including antioxidants, which eliminate the free radical cells and boost your immunity.

According to Ayurveda, eating cucumbers may also help to release excess heat in your stomach, which is said to be a primary cause of bad breath.
Placing cucumber slices in the mouth can help to get rid of bad breath by eliminating bad-odor causing bacteria along with eliminating the formation of microbes, which can also lead to oral health complications and gum disease.
MAIN THING: Cucumber include in your diet combats bad breath.

Cucumbers involve multiple B vitamins, including vitamin B1, vitamin B5, and vitamin B7. B vitamins are known to help ease feelings of anxiety and buffer some of the harmful effects of stress.
MAIN THING: Vitamin B complex responsible for stress management so cucumber help to manage your stress.

Some cucumbers mat turn bitter akin to bottle gourds due to terpenoid toxic compounds such as cucurbitacin B, D, G and H etc.

Cucumbers can be sold easily in the local markets all around the season. Fresh varieties, depending upon the cultivar type and region, as well as preserved, pre-processed, and pickled are also made available in the grocery stores.
Buy fresh ones that ingredient bright green color, firm and stout in texture. Look for spots, cuts or breaks on its surface. Do not buy overly mature or yellow colored cucumber since they tend to possess tough skin and inedible seeds. Avoid those with wrinkled ends as they indicate old stock and out of flavor.

Once at home, they should be washed thoroughly in neat water to rid off any surface dirt and pesticide residues. Their skin comes in a range of colors and often with tiny spikes that should be rubbed off easily. Do not discard the peel as it has vital minerals, fiber and phytochemicals.
To store, keep them at room temperature for a day or two, but better stored in the refrigerator set at high relative humidity where they stay fresh for several days.
favorite_border 138 Thanks
bookmark_border Bookmark