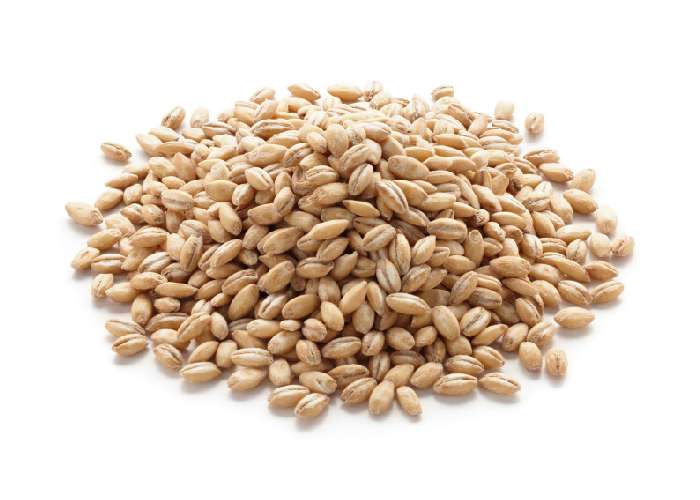 Body laugh with barley like a comic of charlie
Barley is a cereal plant of the grass family Poaceae and its edible grain. Barley is the 4th largest grain crop globally, after wheat, rice and corn. Barley is commonly used in bread, soups, stews, health products and medicine.
Barley is used for lowering blood sugar, blood pressure and cholesterol, digestive complaints including diarrhea, stomach pain and inflammatory bowel conditions and also helps in reducing weight. It also cancer preventive properties.
Barley prevents disease conditions like hypertension, arthritis, asthma, impotence, skin problems, anemia, obesity, constipation, diabetes, kidney problems or heart diseases.
Botanical Name: Hordeum vulgare
Barley was one of the first domesticated grains in the Fertile Crescent, an area of relatively abundant water in Western Asia and near the Nile river of northeast Africa.
Barley was the chief plant of the Hebrews, Greeks and Romans and of much of Europe through the 16th century.
There is mainly two types of barley, two-row barley (Hordeum spontaneum) and six-row barley (Hordeum vulgare). 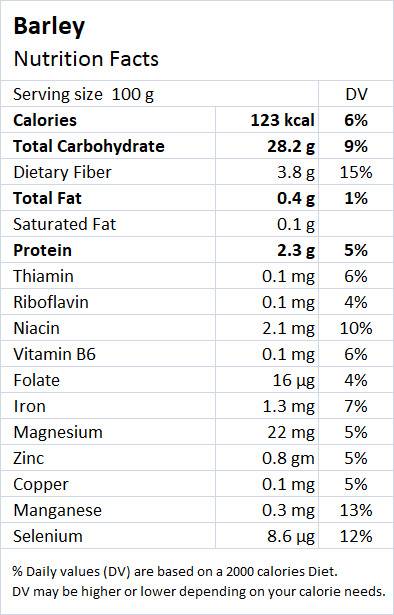 Barley is an excellent source of fiber, can help wash out the toxins of the body. Barley is rich in dietary fiber, which is work as a fuel source to the bacteria which are helpful in the large intestine. These bacteria help in fermenting the fiber content of barley, forming butyric acid, which is the primary food for intestinal cells. It is greatly effective in maintaining a healthy colon. Barley can boost your intestinal health.
In Ayurveda, barley water helps in facilitating the process of digestion. It is also helpful for those who suffer from constipation or diarrhea, and it also helps restore the electrolyte balance during infections.
MAIN THING: Barley makes intestine in proper health, it helps increase the movement time of feces and also keeps stomach clean.

Barley contains niacin that can help reduce the overall cholesterol, lipoprotein levels and minimize cardiovascular risk factors. Atherosclerosis is a condition when the artery walls thicken due to the coagulation or deposition of fatty material like cholesterol.
The insoluble fiber contains propionic acid that helps keep blood cholesterol levels low. Barley is an excellent source of both soluble and insoluble fibers, which help naturally low-fat content and minimal cholesterol content.
The beta-glucans found in barley reduce an LDL cholesterol by binding to bile acids and protect the heart against dangerous cardiovascular disease.
MAIN THING: Regular consumption of barley can lower high cholesterol levels in your blood and help to stabilize your blood pressure.

Barley is an excellent source of fiber, which feels full and cutting down on food intake. it is good for digestion, it also stimulates the metabolism of fats.
Soluble fibers are a source of beta-glucan, which works as a gel-like substance in the gut, which slows the digestion and absorption of nutrients. It also decreases food intake and reduces weight loss.
MAIN THING: Regularly barley consumption, reduce risk of obesity significantly.

Barley is rich in iron and anti-inflammatory nutrient. Iron improves blood volume and prevents anemia and fatigue and other symptoms anemia.
MAIN THING: Barley is an excellent source of iron which helps to produce red blood cells and increase the volume of blood and help to cure anemia.

Magnesium is rich in barley and magnesium maintains glycemic index by improving the production of insulin and maintain blood sugar. So that mineral present in barley controls diabetes.
Barley effectively helps control type 2 diabetes mellitus because of its high-fiber content. Barley has all the essential vitamins and minerals, particularly beta-glucan soluble fiber.
MAIN THING: Barley has Magnesium and high-fiber content which effectively helps to control type 2 diabetes mellitus.

The phosphorus and copper are present in barley which is necessary for the construction of bones.
A careful balance of phosphate and calcium is important for proper bone mineralization. Bone formation requires the mineral manganese, iron and zinc, all of three play important roles in the production and maturation of collagen and contribute to building and maintaining bone structure and strength. So barley prevents disease conditions like osteoporosis.
MAIN THING: Barley contains several essential vitamins and minerals that help to maintain bones and teeth health.

Barley has high fiber content that plays a central role in the prevention of cancer. the insoluble fiber in barley helps reduce the time food takes to clear gut, which appears particularly protective against colon cancers.
Other compounds found in barley including antioxidants, phytic acid, phenolic acids, and saponins also protect against cancer or slow its development.
Barley and barley grass rich in B vitamins and chlorophyll that detoxify the body and destroy the cancer cells and free radicals in the body.
A research done on barley stated that eating whole grains like barley can help prevent the risk of colon and rectal cancers.
One Article on barley concluded that the anti-cancer activities are higher in barley compared to the other crops.
Anothe study showa the β-d-glucans which found in barley has effects on breast cancer cells.
MAIN THING: Nutrients in barley can reduce the risk of cancer

Gluten sensitivity: The gluten in barley can increase the condition of celiac disease so avoid using barley.
Allergy: Consuming barley might cause an allergic reaction in people who are sensitive to other cereal grains, including rye, wheat, oat, corn and rice.
Diabetes: Barley might lower blood sugar levels. So if a person who has diabetes taken barley under the guidance of a physician.
Surgery: Barley might lower blood sugar levels. Stop using barley at least 2 weeks before a scheduled surgery.

First of all, choose clean barley. Buy only when the outer skin is removed, but the inner pulp and embryo coverage remain. Only a fraction of the fibers and components are lost.
When buy products of barley, look for any damage to the container and be sure to check the suitability of the label.

Keep barley in a dry, dark and cool place.
favorite_border 138 Thanks
bookmark_border Bookmark