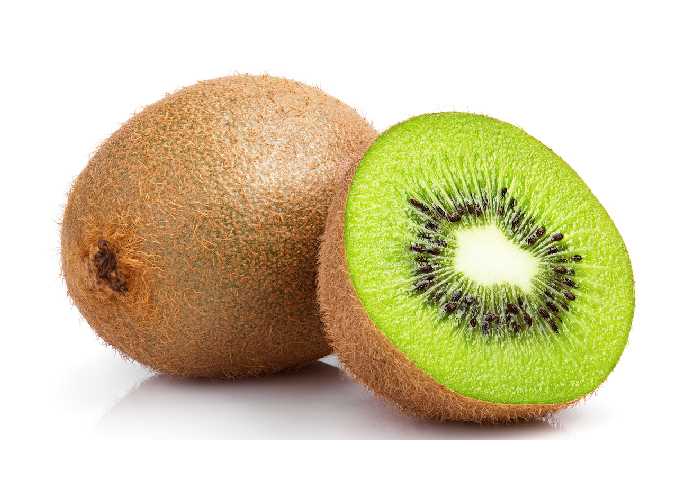 Kiwifruit is grown on vines, similar to grapes. Kiwi is botanically categorized as a berry. If you are allergic to latex, you are likely to also be allergic to kiwi, bananas and avocado. Kiwi were first exported to the United States in 1904.
The kiwifruit is native to China. The first seeds were brought out of China by missionaries to New Zealand at the turn of this century. In addition to New Zealand and California, kiwifruit is also grown commercially in such areas as Italy, South Africa and Chile.
The original Kiwi, which is green fleshed, met its (commercially) new relative the golden kiwifruit (Actinidia chinensis) in 1991. The golden kiwifruit was developed in Te Puke, a small town in northern New Zealand. This variety of kiwi is yellow fleshed and has a much thinner skin than the green kiwi. The golden kiwi got the nickname “Chinese Gooseberries” around 1960, due to the resemblance people felt they had to gooseberries.
Botanica Name: Actinidia deliciosa
There are 66 species in Actinidia , among which 62 species are in China and the majority of them are endemic to China. A. chinensis and A. Deliciosa are two species that are most common in the market. and Other types may also be available in specialty markets are Gold kiwis, Hardy, Hayward, Kolomikta as per appearance actual name of Kiwi Varieties are Zhong Hua, Jing Li, Ruan Zao, Mao Hua, Huang Yan. 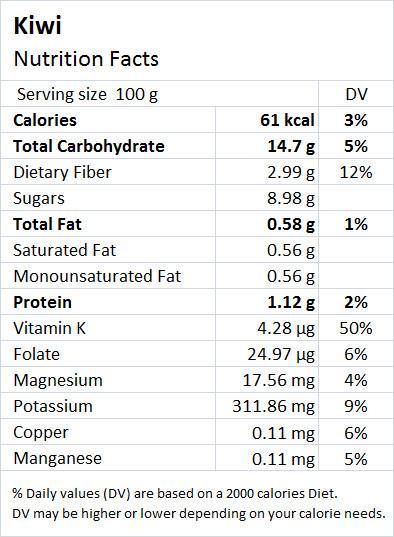 Serotonin helps in improving sleep quality. kiwi is a good source of serotonin it helps in improving sleep quality. The serotonin in kiwifruit has been shown to increase sleep time and sleep efficiency.
Some researcher says, the effects of kiwifruit on sleep quality in adults with sleep problems. They found that eating kiwis improved sleep according to self-rated measures.
MAIN THING: Kiwifruit consumption may improve sleep onset, duration, and efficiency in adults with self-reported sleep disturbances.

The potassium is a vasodilator, relaxing the blood vessels throughout the body and helps lower blood pressure, counteract sodium in the body. The fibers along with vitamin K, which are able to prevent the buildup of calcium in the arteries and therefore able to reduce the risk for heart attacks. As mentioned, kiwifruit is rich in protective polyphenols along with vitamin C, vitamin E, Fibers and potassium.
A study on conducted on kiwifruits found that people who ate 2-3 kiwis in a day for a 28 days reduced their blood clotting by 18% and triglycerides by 15%.
Overall, kiwifruit include in diet, is a great way to maintain cardiovascular health.
MAIN THING: Regular consumption of kiwi fruit prevents the build-up of plaques and deposits in the arterial walls, thus protecting against cardiovascular diseases.

Vitamins C and E can help fight hair loss and maintain hair health. As mentioned, kiwifruit is rich in protective polyphenols along with vitamin C, vitamin E, Fibers and potassium that stimulate blood circulation, thereby accelerating hair growth and contribute to the collagen formation on the scalp.
Kiwi is Good for dry and rough hair due to high content of omega-3 fatty acids in kiwifruit seed oil hydrates the hair without weighing it down. The oil is best suited for dry and unruly hair.
Kiwifruit maintain the natural color of the hair due to The high amounts of copper, preventing premature graying.
MAIN THING: Kiwifruit prevents Hair Loss, aid in collagen formation on Scalp, Good For Dry And Rough Hair and Prevents Premature Graying.

Raw kiwi contains enzyme called actinidain, a protein-dissolving enzyme similar to that of papain in papaya and commonly used as a meat tenderiser. it also helps in the digestion of proteins and the patients suffering from irritable bowel syndrome.
Numerous anecdotal reports have suggested that kiwifruit has laxative effects and could be used as a dietary supplement, especially for the elderly who often experience constipation. kiwifruit contain fibers about 3.4 g/100 g, thus being a good source of dietary fiber, it helps form a soft, bulky stool and also to promote normality in bowel movement frequency over the long term.
MAIN THING: Regular consumption of kiwifruit was shown to promote bulkier, softer, and more frequent stool production and improve digestibility.

Kiwifruit is huge source of antioxidants and vitamin C. It improves lung function and also prevents wheezing among children and to treat asthma.
Several studies have shown that vitamin C in kiwifruit was able to reduce the symptoms of the patients, including decreasing wheezing, head congestion and duration of sore throat that beneficial reactions in both adults and children suffering from asthma and other respiratory illnesses and infections after adding kiwifruit to their diets.
MAIN THING: Children who ate kiwifruit only once or twice a week, which high in vitamin C content have been used successfully to treat a number of respiratory illnesses.

Macular degeneration is the leading cause of vision loss in older adults. Kiwifruits contains high levels of lutein and zeaxanthin, the natural chemicals found in the human eye. Lutein is able to protect age related macular degeneration and by filtering out damaging short-wavelength UV light.
A study showed that eating 3 or more servings of fruit per day decreased macular degeneration by 36 %. This is due to high levels of lutein and zeaxanthin—both of which are natural chemicals found in the human eye.
MAIN THING: Eating 3-4 kiwifruits can Protects Against Macular Degeneration and Other Eye Problems in older adults.

Since many years the kiwi trees family have been used as medicinal plants in China, for treating like joint pain, bladder stones, and cancers of the liver and esophagus. Both the fruit and roots of kiwi have proven inhibitory effects on human liver, lung and colon cancer cell growth.
Kiwifruits are good source of flavonoids and carotenoids which exhibit antioxidant that helps to prevent or healing of cancers. Catechin helps in reducing the toxicity of anti-cancer agents by stimulating the bone marrow proliferation.
MAIN THING: kiwifruits are the best cancer-fighting natural food due presence of phytochemicals which helps to protect DNA from damage by free radicals and oxidative stress and prevent the growth of cancer cells.

Kiwis are a rich source of vitamin C , E and other antioxidant compounds and also rich in polyphenols that have immunostimulatory activity, meaning they can prompt an immune system response.
A study found that kiwifruits may support immune function and reduce the likelihood of developing cold- or flu-like illnesses and helps in fighting seasonal infections due to its antimicrobial and antifungal action. It also exerts anti-inflammatory effects and exhibits the activity of pro-inflammatory cytokines.
MAIN THING: High vitamin C content along with other antioxidant compounds in kiwifruit boosts the immune system.

Kiwi is Safe in food amounts. In people who are allergic to kiwi, it can cause allergic reactions such as trouble swallowing (dysphagia), vomiting, and hives.

Store un-ripened kiwifruits in plastic bags under refrigeration for up to 6 weeks.
favorite_border 110 Thanks
bookmark_border Bookmark