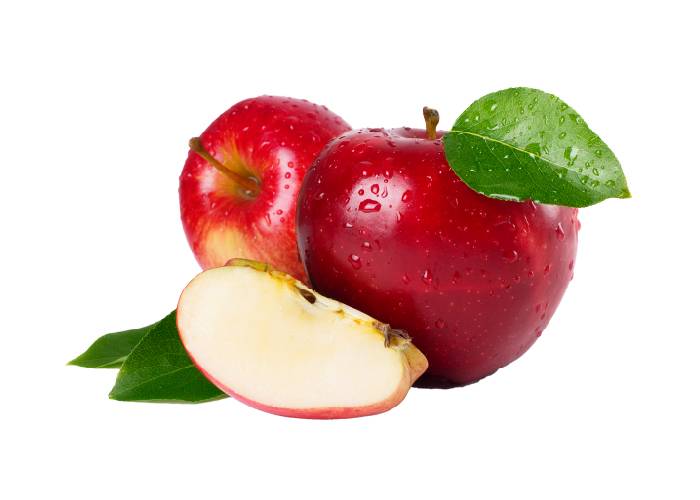 An apple a day does keep the doctor away – British Adage
Apple has always been popular for its medicinal value. Apple is an extremely delicious and crunchy fruit with the abundance of dietary fibers, polyphenols vitamin C and various antioxidants. They are also very filling, considering their low calorie content.
Supplementation of diet with apple has shown in Studies that to cut down the risk of heart diseases, type 2 diabetes mellitus, high cholesterol and triglyceride levels and cancer like benefits for health. They taste delicious on their own and are usually eaten raw, but they are also used in various recipes, juices and drinks.
Botanical Name: Malus domestica
There are many different 7,500 varieties, with a variety of colors and sizes. The skin of apples is thin but sturdy and the inner flesh is thick and juicy, and it softens as it ripens. The inner core holds the seeds, which are dangerous for your health.
The nutrients are in the flesh and the skin, which are a rich source of anthocyanins and tannins. It’s indeed true when they say, “An apple a day keeps the doctor away! 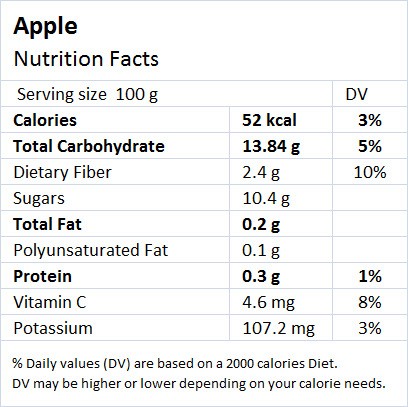 Apples are mainly composed of Carbohydrates and water, and are rich in simple sugars, such as fructose, sucrose, and glucose, but Glycemic index is low, ranging from 29 to 44.
Apples are very rich in fiber. A single medium-sized apple contains about 4 grams of fiber, about 17% of the recommended daily intake.
A portion of their fiber content is made up of both insoluble and soluble fibers called pectin.
Soluble fiber has been associated with numerous beneficial effects on health, partly mediated by their effect on the friendly bacteria in the intestine and also improve satiety and cause weight loss, while lowering blood sugar levels and improving the function of the digestive system.
MAIN THING: Apples contain CHO, water and fiber, which moderates blood sugar levels and promotes colon health.

Apples are usually a good source of vitamin C. Vitamin C (ascorbic acid) is a common antioxidant in fruits. It is an essential dietary nutrient that has many important functions in the body.
Apples are a good source of Potassium. High intake of potassium may have beneficial effects for heart health.
MAIN THING: Apple contains decent amounts of both vitamin C and potassium.

Apple has high fiber and low in energy density. Both of these have been shown to lead to reduced calorie intake and significant weight loss in the long-term.
MAIN THING:  Due to the fiber and low calorie content apple helps in weight loss

Blood sugar control is essential for people who suffer from diabetes and the polyphenols in apples have been directly linked to reducing the uptake of carbohydrates by the body.
Apple has emerged to play a vital and beneficial role in the management of type 2 diabetes mellitus.
One of the study show that the consumption of a 25 g glucose load in commercial apple juice compared with that consumed in water has statistically significant effects on plasma concentrations of glucose, insulin, GIP and GLP-1.
Apple is effective and efficient in lowering the glycation level in conditions when the level of glucose is high i.e. in diabetes.
Studies indicate that in future “Malus domestica” can be used for lowering glucose level in the body.
MAIN THING: Apples may help protect against diabetes show in some studies.

Scientific evidence has shown that apples, apple juice, or some of the plant compounds in apples, can have anti-cancer effects and reduced the risk of cancer.
The dietary fiber (pectin) present in apples and its peels protects the colon mucous membrane from exposure to harmful substances.
There have also been some animal studies showing that apple phytonutrients can protect against cancers of the lungs and colon.
Consumed 1 or more apples per day were at a lower risk of getting cancer, including a 20% lower risk of colorectal cancer and 18% lower risk of breast cancer.
MAIN THING: Apples may lower the risk of cancer due to several antioxidants

Several studies have looked at the effect of apples on risk factors for heart
A reduced risk of cardiovascular disease has been associated with apple consumption.
The Women's Health Study surveyed nearly 40,000 women with a 6.9-year follow-up, and examined the association between flavonoids and cardiovascular disease.
Apple intake contributed to approximately 10% of the total ingested flavonoids and was also associated with a reduced risk of death from coronary heart disease in men, however the relationship was not statistically significant.
A research found 30% drop in the cholesterol levels in individuals who consumed 2 apples daily as compared to individuals who did not consume apples at all. Another study showed a decrease in the triglyceride levels by 52% in individuals who consumed apple daily. Thus, individuals can surely make whole apples a part of their hypolipidemic diet.
MAIN THING: Apples are rich in healthy antioxidants and fibers, which may make them protective against heart disease.

Several studies show positive effects of eating apples daily on the outcomes related to Alzheimer’s disease has been observed due to attributed to the presence of polyphenol in them. It was further found that drinking apple juice suppresses the expression of markers of Alzheimer’s disease and decreases the rate of cognitive decline, which means the mental process of acquiring knowledge and understanding.
MAIN THING:  Apple contains polyphenol, which may make them protective against Alzheimer’s disease.

Apples are rich sources of Vitamin and Minerals which promote the overall health of the eyes, skin and hairs. Apple contains procyanidin, a natural compound that encourages the protein to promote hair growth. Thus, eat an apple daily to get long and lustrous hair.
MAIN THING:  Apple with a rich source of Vitamins and Minerals, which may promote health of eyes, skin and hairs.

Apples are a delicious fruit. Pectin accounts for approximately 50% of an apple's total fiber content. The pectin in apples has prebiotic benefits. It increases butyrate, a short-chain fatty acid that feeds the beneficial gut bacteria and decreases the population of harmful bacteria.
Fiber rich fruits like apple bind together the bits of food in the small intestine while drawing water to make the stool easier and softer to pass. Thus, it works as a natural antidote for constipation.
MAIN THING: Apple contains pectin has prebiotic effect and it binds together, which may help in the easy passage of stools without much pressure.

The oil extracted from Apple seeds is also useful and has many applications, especially in the cosmetic industry. The benefits of apple seed oil come from the impressive mineral and protein content, and include reducing the appearance of acne, reducing wrinkles, moisturizing the skin, preventing skin cancer, boosting skin elasticity, preventing sun damage and stimulating the production of collagen to produce new, healthy skin cells. This oil should not be consumed orally, but can be used for topical applications.

Apples are Likely Safe for most people. The apple seeds, however, contain cyanide and are poisonous. Eating enough seeds (in one case, one cup of apple seeds) can cause death. The cyanide is released in the stomach as the seeds are digested, so it may take several hours for the symptoms of poisoning to appear.

Pregnancy and breast-feeding: Apple is safe in amounts found in food.
Allergy to apricot and related plants: Apple may cause an allergic reaction in people who are sensitive to the Rosaceae family.
Diabetes: Apple, especially apple juice, can increase blood sugar levels. Monitor your blood sugar carefully if you use apple products and have diabetes.
Other Side Effects: Apple cider can also aggravate symptoms like swelling, hives and breathing difficulty as well as indigestion and heartburn.
Interactions: Moderate Interaction with Fexofenadine (Allegra)

Choose fresh, firm and bright textured apples and avoid the ones with marks for the reason that they indicate mottled pulp.

With regards to storage, it can be kept at room temperature for a few days. Under refrigeration, it can be stored for up to two to three weeks.
favorite_border 204 Thanks
bookmark_border Bookmark