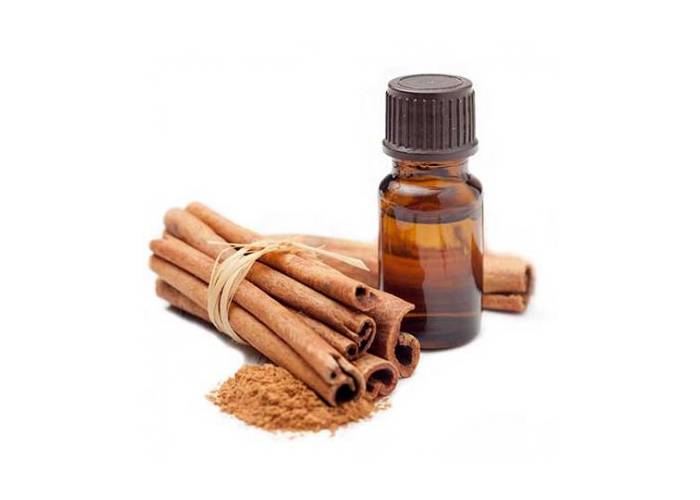 Cinnamon oil prepared from the cinnamon bark, which is the healthiest spice. Cinnamon oil has a warm, sweet aroma. Cinnamon oil contains a number of compounds that provide good health benefits. The main compound of cinnamon oil is cinnamaldehyde.
Cinnamon oil has anti inflammatory, anti bacterial, anti microbial, decongestant and expectorant properties.
Cinnamon oil has many health benefits such as, fight with inflammation, treat respiratory troubles, provide cardiovascular health, reduce stress and anxiety, protection against cancer, provide good digestion, control the blood sugar level, control the blood pressure, etc.
Botanical Name: Cinnamomum verum
Cinnamon was highly valued by ancient Egyptians and has been used by Chinese and Ayurvedic medicine practitioners in Asia for thousands of years to help heal everything from depression to weight gain.
Cinnamon oil is derived from the bark of the cinnamon plant. The cinnamon plant is native to parts of South Asia but today cinnamon plants are grown throughout Asia in the form of cinnamon spice as well as cinnamon oil.
Variety of cinnamon oil depends upon the which type of cinnamon used in the preparation, Cinnamomum cassia & Cinnamomum Verum.

Cinnamon oil is lower in fat. So it can help in protecting the heart from various heart diseases such as heart attack, stroke, atherosclerosis, thrombosis, embolism, plaque, etc.
Cinnamon oil has essential oil which can help in lipid metabolism. This oil can remove bad cholesterol from the body by increasing the level of good cholesterol.
Cinnamon oil also has cinnamaldehyde which is the main compound of the cinnamon oil. This compound has anti-inflammatory properties. It can fight with infection and protect the heart from the heart attack because it can reduce the risk of the formation of plaque in the vessels.
MAIN THING: Cinnamon oil also improves the blood circulation in the coronary artery, which provides blood to the heart and protects the heart.

Cinnamon oil is super oil because Cinnamon oil boosts focus, concentration, and mental ability so it is useful in making medicine.
Cinnamon oil can help in the prevention of neurodegenerative diseases which are characterized by progressive loss of the structure or function of brain cells. Alzheimer's and Parkinson's disease are neurodegenerative diseases.
Cinnamon oil has some important compounds that can inhibit the accumulation of a protein in the brain, which is one of the hallmarks of Alzheimer's disease. Cinnamon oil can also protect neurons and improved motor function.
MAIN THING: cinnamon oil contains all nutrients which enhance the brain activity and keep the nervous system healthy and maintain brain health.

MAIN THING: Cinnamon oil has antibacterial properties and also reduces the anxiety and stress which can help in curing the ulcers and improve digestive health.

Cinnamon oil has many compounds that interfering in numerous digestive enzymes, which slows the breakdown of carbohydrates in the digestive tract. So Cinnamon oil decreases the amount of glucose that enters the bloodstream after a meal so in this way it helps to decrease the blood sugar level.
Many people are resistant to the effects of insulin. Insulin is one of the principal hormones that regulate metabolism. It is also essential for transporting blood sugar from the bloodstream to cells. Cinnamon oil has a unique compound that can act on cells by mimicking insulin. This mimicking insulin improves glucose uptake by cells so by this way cinnamon oil help in person who has type 2 diabetes.
MAIN THING: Compounds in cinnamon oil  that alter function of digestive enzymes and can act on cells by mimicking insulin helps to control blood sugar.

Cinnamon oil is a great source of antioxidants. Antioxidants in cinnamon oil are work as a protector because it reduces free radical and slow the aging process and prevent cancer because of free radicals in the body is the main reason for cancer.
Cinnamon oil has specific types of antioxidants, such as polyphenols, phenolic acid, and flavonoids. These antioxidants fight with oxidative stress in the body because lower oxidative stress means the prevention of chronic disease.
Many Studies have shown that cinnamon essential oil may have protective effects on cancers of the head and neck.
MAIN THING: Cinnamon essential oil showed antioxidant activity which help to cure cancers of the prostate, lung and breast.

Cinnamon oil can maintain sexual life happy by boost sexual function and erectile function. Cinnamon oil can increase the time of ejaculation and decrease the rate of dead sperms.
One study conducted on aged rats, found that their sexual health is improve.
MAIN THING: Cinnamon oil help to active those regions of the brain that stimulate desires and sexual urges.

Selection
Select the oil that can full of nutrients. During choosing of oil also look for the color of oil, the odor of oil and the quality of oil as well as content present in the oil.
Always buy oil at the supermarket where the good and fresh quality is available.
Storage
Store the oil in a clean, dry and airtight container. Keep in a cool and dry place away from humid weather.
favorite_border 109 Thanks
bookmark_border Bookmark