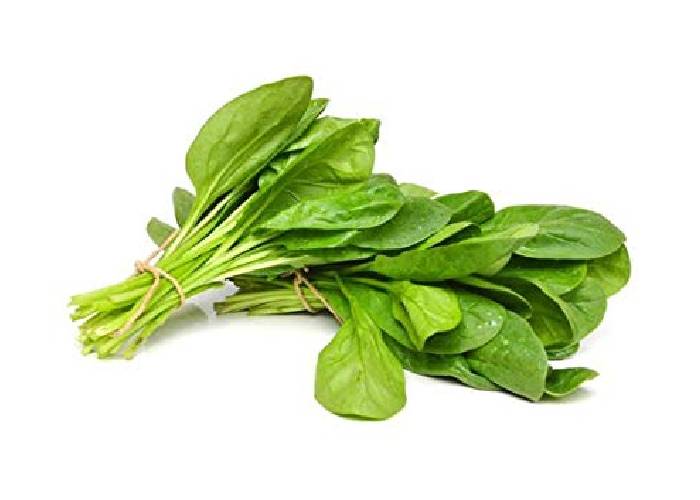 To keep the body in good health is a duty, otherwise we shall not be able to keep our mind strong and clear.
Spinach, a super cold-hardy leafy green, is a popular crop that can be planted in very early spring, as well as in fall and even winter in some areas.
Spinach has similar growing conditions and requirements as lettuce, but it is more versatile in both its nutrition and its ability to be eaten raw or cooked. It is higher in iron, calcium, and vitamins than most cultivated greens, and one of the best sources of vitamins A, B, and C.
Spinach is loaded with tons of nutrients in a low-calorie package so known as a superfood. It is important for skin, hair and bone health and also improving blood glucose control in people with diabetes, lowering the risk of cancer, improving bone health, as well as supplying minerals and vitamins that can provide a range of different.
Botanical Name: Spinacia oleracea
Spinach is a leafy green flowering plant native to central and western Asia.Today, the United States and the Netherlands are among the largest commercial producers of spinach.
The main Varieties are Savoy spinach, Semi-savoy spinach and Smooth-leafed Spinach. 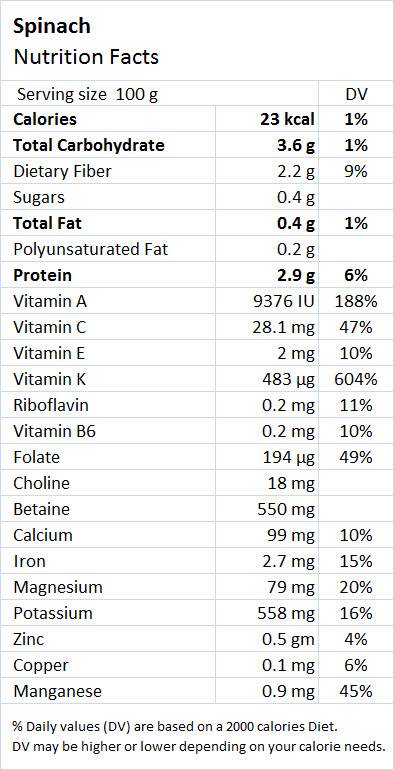 Spinach has large quantities of vitamin A, which moderates the production of oil in the skin pores and hair follicles to moisturize the skin and hair.
Spinach is higher in vitamin C which is important for the building and maintenance of collagen, which provides structure to skin and hair.
A study find that Iron deficiency is a common cause of hair loss and it reduces by eating spinach because it rich in iron. The biggest problem that teenagers and many adults face is acne.
Get healthy and glowing skin by grinding spinach and mixing it with a little water and applying on face. So, spinach work as a detoxification.
MAIN THING: Rich source of vitamin A, C and iron which are responsible of healthy hair and skin.

Spinach is a rich source of beta-carotene, lutein, and xanthene, which are beneficial for eyesight. Beta-carotene, in raw spinach, helps boost eye health. It can also prevent vitamin A deficiency, itching eyes, eye ulcers, and dry eyes.
A review shows that the anti-inflammatory properties of these spinach can also cut down the puffiness or irritation in the eyes. The lutein and zeaxanthin present in spinach both act as active antioxidants, thus preventing the eyes from the harsh effects of UV rays that can lead to cataracts. They also reduce the impact of free radicals, which can be a major cause of cataracts and other eye conditions.
MAIN THING: Vitamin A and antioxidants found in spinach for brighten eyesight.

Benefits spinach with a high antioxidant capacity has been associated with the mitochondrial activity, responsible to influence cognitive function. Spinach contains potassium, folate, and various antioxidants are known to provide neurological benefits to people who regularly consume it.
Researchers finds that folate helps to reduce the occurrence of Alzheimer’s disease.
Potassium is an integral part of brain health as well, and it has been linked to increased blood flow to the brain and heightened cognition, concentration, and neural activity.
MAIN THING: The consumption of spinach might be a good idea for people who are at risk of neural or cognitive decline and prevent Alzheimer’s disease.

Spinach has a high content of potassium and no sodium content in its raw form prior to preparation. This composition of minerals is beneficial for high blood pressure patients as potassium lowers and sodium raises the blood pressure.
Folate current in spinach also contributes to the reduction of hypertension and relaxes blood vessels, while maintaining proper blood flow. By reducing blood pressure and relaxing the tension of vessels and arteries, you can reduce stress on the cardiovascular system and increase oxygenation to the body’s organ systems for optimal functionality.
MAIN THING: HIgh content of potassium and folate in spinach that regulates blood pressure.

Spinach contains an antioxidant known as alpha-lipoic acid, which has been shown to lower glucose levels, increase insulin sensitivity and prevent oxidative, stress-induced changes in patients with diabetes.
A study finds that spinach has alpha-lipoic acis that decrease risk of peripheral neuropathy and autonomic neuropathy in diabetic patients.
MAIN THING: Regular consumption of spinach help to manage your diabetes.

Vitamin K-rich spinach helps in blood clotting by producing prothrombin and it thus helps relieve symptoms hemophilia.
Many studies shows that vitamin k presence in spinach, It is great for controlling excessive bleeding and it also keeps the liver functioning by stimulating the production of glycogen.
MAIN THING: Feeding of spinach helps to relieve hemophilia symptoms.

Spinach is a good source of Vitamin K, which functions in retaining calcium in the bone matrix, thereby leading to bone mineralization.
A review suggested that minerals like manganese, copper, zinc ,magnesium, and phosphorus also help in building up strong bones. they can help to prevent an individual from developing osteoporosis.
MAIN THING: Spinach can help to stronger your bones and maintaining healthy teeth and nails.

Spinach is the perfect muscle relaxant. You might notice that when you consume a good amount of spinach, you will feel drowsy and want to sleep, which is due to how it contains high levels of zinc and magnesium that accelerate sleep in our bodies. The effects are like being given a limited dose of morphine.more, magnesium also helps to replenish your body with energy.
MAIN THING: Due to muscle relaxant effect of spinach will leads to better sleep.

Folate found in spinach is needed by a growing fetus and helps aid in the proper development of the nervous system.
The high levels of vitamin A in it are advised to be consumed in recommended daily amounts by the mother. Vitamin A is required for proper lung development of the fetus and can be transferred during breastfeeding, so spinach consumption is recommended to be continued after birth. It gives them protein, vitamins, minerals, and phytonutrients.
MAIN THING: Folates and Vitamin A present in tomato that responsible for fetal development in their essential growing stages.

Spinach is safe in food amount.
Kidney stones: Kidney stones are caused by acid and mineral salt buildup. The most common variety is calcium stones, which consist of calcium oxalate. Spinach is high in both calcium and oxalates, so people who are at a risk of developing kidney stones should limit their intake.
Blood clotting: Spinach is high in vitamin K1, which serves several functions in your body but is best known for its role in blood clotting so it could interfere with blood-thinning medication. People who are taking blood thinners should consult with their healthcare practitioner before eating large amounts of spinach.

When buying spinach, make sure that the leaves and stems are crispy and dark green in color.
Avoid spinach whose leaves and stems appear yellowish or pale green and are wilted and bruised, as the spinach has started to turn or is already poor.

Fresh spinach can be stored in the refrigerator at 2-5 Degree Celcius for 2-3 days and should be consumed within that period.
Don’t wash the spinach before storing in the refrigerator as exposure to water encourages spoilage.
Place it in a plastic bag before putting it in the refrigerator. Store spinach away from other fruits and vegetables as it is ethylene sensitive and may turn bitter in taste.
Spinach can also be frozen and kept fresh for 8 months but make sure to blanch it for 2-3 minutes before putting it into the freezer.
favorite_border 139 Thanks
bookmark_border Bookmark