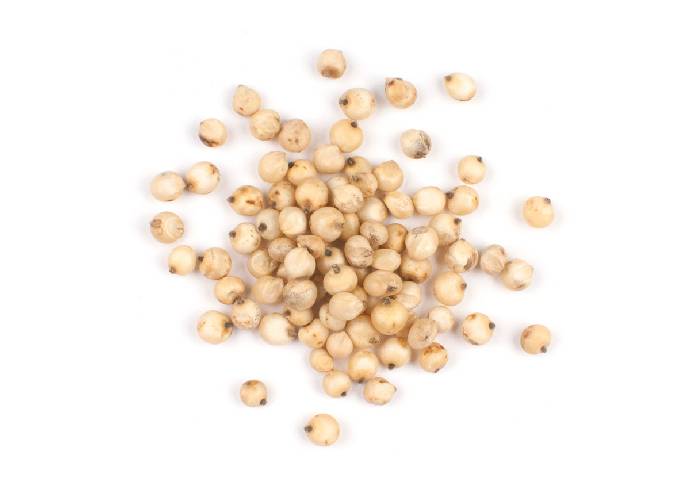 Calm mind brings inner strength and self confidence, so make your body healthy with sorghum
Sorghum is the 5th most commonly grown grain crop in the world after wheat, corn, rice, and barley.
some species of sorghum can contain levels of hydrogen cyanide, hordenine, and nitrates which are lethal to grazing animals. When stressed by drought or heat plants can also contain toxic levels of cyanide and nitrates at later stages in growth.
Sorghum is primarily used in the production of sorghum molasses, sorghum syrup and as a grain. it also used in the production of alcoholic beverages and even bio-fuels around the world. It is widely considered the fifth most important cereal crop in the world.
Sorghum is a strong grass and usually grows to a height of 0.6 to 2.4 metres , sometimes reaching as high as 4.6 metres. Stalks and leaves are coated with a white wax, and the central portion, of the stalks of certain varieties is juicy and sweet. The leaves are about 5 cm broad and 75 cm long. The tiny flowers are produced in panicles that range from loose to dense; each flower cluster bears 800–3,000 kernels. The seeds vary widely among different types in color, size and shape.
Botanical Name: Sorghum bicolor
Sorghum is also known as a great millet, Indian millet, milo, durra, orshallu, etc. The plant likely originated in Africa, where it is a major food crop, and has numerous varieties, including grain sorghums, broomcorn, etc.In India sorghum is known as jowar, cholam, or jonna, in West Africa as Guinea corn, and in China as kaoliang.
Important species for humans, Sorghum bicolor, is native to Africa, but can now be found all around the world as a staple food.
Sorghum represents a major crop in the United States, India, Argentina, Mexico, Africa, China and Australia.
There are four main types of sorghum, Sweet sorghum, Biomass sorghum, Grain sorghum and Forage sorghum. 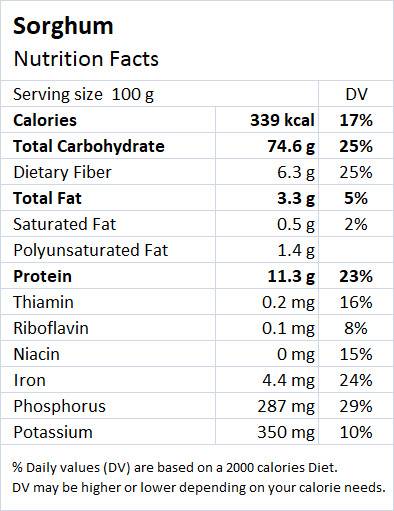 Sorghum has a minerals like copper, iron, zinc, magnesium, and calcium. Copper in sorghum helps to increase the absorption of iron into the body, which help in reducing the risk of iron deficiency anemia. iron and copper in the body increase the red blood cell development and boosting blood circulation, stimulating cellular growth and repair, and increasing the hair growth, while also boosting the energy levels in the body.
So sorghum provide healthy circulation all over the body.

Sorghum is rich in manganese and Manganese is a principal component of thyroxine which is an essential hormone in the thyroid gland. Sorghum is helps to function the thyroid glands properly which helps in losing weight, appetite, efficient organ systems and metabolism.

Sorghum contains phosphorus and vitamin B6 which are both vital nutrient for functioning of brain.
Phosphorus helps to maintain the response of emotions, neurons and hormones. If phosphorus is not in adequate amount in the body so it decrease in cognitive power and age related neurodegenerative disorders such as dementia and Alzheimer’s disease.
Vitamin B6 has a huge role in the production of serotonin and GABA which are main neurotransmitters in the brain which controls the mood. Vitamin B6 helps to prevent mood disorders and raise mood.
Vitamin B6 also regulates the production of hormones in the brain which treats the brain diseases and mood disorders. So , sorghum provides overall brain health and makes healthy and happy.

Sorghum has very important antioxidants. Antioxidants eliminate the free radicals from the body which leads the healthy cells to mutate into cancer cells. So these antioxidants reduce the risk of many cancer like esophageal cancer.
Sorghum contain 3-deoxy anthocyanins which is mostly present in the darker-coloured sorghum, helps in reducing the risk of colon cancer.

Sorghum is high in fibers either soluble and insoluble and When maintain a fiber-rich diet , it make free from problems such as flatulence, cramping, diarrhea, nausea, constipation, and distension etc. So , helps keep the digestive system in order.
Sorghum also prevent against some other digestive disease like diverticulitis, chronic constipation and unnecessary straining.
Sorghum has a prebiotic effect on the human gut microbiota due to its high level of fiber. It helps feed the ‘good’ bacteria in the gastrointestinal tract, which improves digestion and increase nutrient uptake in the body. So sorghum makes digestive system healthy.
Excess amounts of fiber in the body helps to scrape off dangerous cholesterol, which helps to improve heart health and protect the body from conditions like atherosclerosis, heart attack, and stroke.

Sorghum is rich in tannin which regulates excessive carbohydrates break down. Excessive broken down of carbohydrates causes increased sugar level so sorghum helps in diabetes by inhibiting the absorption of starch in the body, which can help to regulate insulin and glucose levels in the body.
Sorghum helps to balance glucose insulin level and eliminates the plunges and spikes in the glucose levels and also prevents the health complications and diabetics shock.

Gluten is present in all wheat based product which produce allergy to person who have Celiac disease. But Sorghum can be eaten safely by those suffering from this increasingly common condition, without the painful inflammation, nausea, and gastrointestinal damage.

Magnesium and calcium in sorghum build the healthy bone. Magnesium found in high quantities in sorghum, which maintain calcium levels by increasing calcium absorption in the body. These 2 minerals are also integral to the development of bone tissue and speed up the healing of damaged or aging bones. This can prevent conditions like osteoporosis and arthritis, keeping active and healthy into old age.

Sorghum has iron, copper and magnesium which help to increase the iron absorption in the body. This reduces the chances of anemia especially iron deficiency anemia. An adequate amount of iron and copper increases the development of red blood cells, enhance blood circulation, cellular growth, increases hair growth and boost the level of energy.

Poisonous effect: Sorghum is poisonous because of the presence of hydrogen cyanide. In small quantities, hydrogen cyanide is stimulate respiration and improve digestion. But it can cause respiratory failure and even death if taken in excess amounts.

Sorghum are generally available prepackaged as well as in bulk containers. Containers of sorghum products are covered and that the store has a good product turnover so as to ensure their maximal freshness. Whether purchasing these products in bulk or in a packaged container, make sure that there is no evidence of moisture present.
Buy sorghum packaged that sealed properly (especially those that are vacuum packaged).

First of all Clean the area around the container.
Remove previously stored grain from the container before filling it with new grain
Adopt sanitation to avoid spoilage.
Clean trash from grain. Monitor stored grain regularly and aerate regularly
Cool grain sorghum to 40°F if possible
Monitor the top 6 to 12 inches of grain sorghum.
Do not mix dry and wet sorghum. Care should be taken not to mix dry grain with moist grain. The wet grain can create hot spots and re-wetting may also occur as air removes moisture from the wet grain and deposits it into the dry grain.
favorite_border 107 Thanks
bookmark_border Bookmark