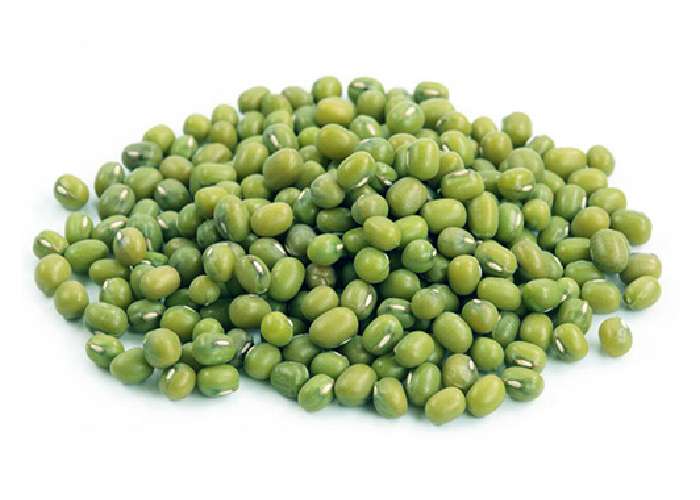 Green gram known as a wholesome food which makes body wholesome (Physically+ Mentally)
The mung bean or green gram is a type of pulse that belongs to a the Fabaceae family. It looks like a small, green seed. It's widely consumed in Southern Europe and in Asian countries. Many people store mung bean bran and processed foods, such as noodles, pasta and flour made from mung beans.
Green gram also is known as a moong. Green gram dal is used in traditional Indian and Southeast Asian cuisine, where it is used to make dough or as the primary ingredient to soups, stews and curries. Green gram dal is rich in protein and fibers and low in fat.
Green gram is one of the best sources of plant-based protein. Green gram possesses biological activities including antioxidant, anti-inflammatory, lipid metabolism, antihypertensive, antihypertensive, antidiabetic, and antitumor effects. It is a high source of protein, fiber, antioxidants, and phytonutrients.
Botanical Name: Vigna radiata
Green gram has been a part of the traditional Ayurvedic diets in India for thousands of years. Considered as one of the most cherished foods in India, green gram has been in use since 1,500 B.C.
Mung beans are native to India from where they spread to Southeast Asia. And since the past couple of decades, mung beans are getting popular in the US and a major portion for consumption is imported from India & China.
Some of the hybrid varieties of green gram in India is, RUM-1, HUM-12, BM-4, PDM-54, JM-72, K-851 and PDM-11. 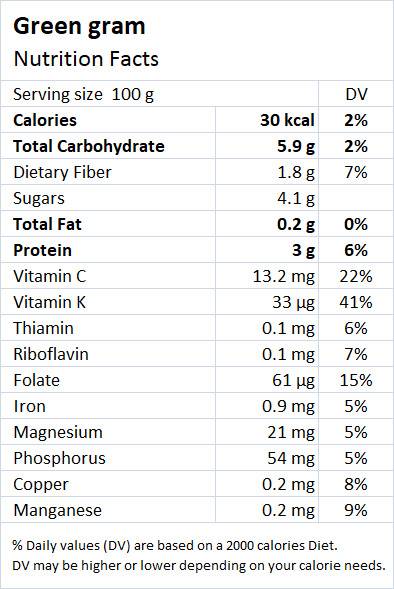 Green gram is highly concentrated by iron and the iron help in the process of carrying oxygen in the blood as well as in the supply of blood to all organs and tissues. So it also supplies oxygenated blood to the whole body as well as brain.
It is beneficial for a person with concentration problems and weak memory. So eating green gram is fulfill the need for iron and it helps in regulating the brain function. This also helps in increasing focus as well as memory.
Green gram also rich source of Mangenese, which is good for nerve functioning and brain health.
MAIN THING: Green gram contain Iron and Mangenese may help in cognitive functioning and improve brain health.

Moong is rich in fiber and antioxidants, which protect the heart by reducing the level of bad (LDL) cholesterol. Elevated cholesterol levels are a major risk factor for heart disease.
Green gram also has an antihypertensive property and it helps in keep away the high blood pressure and other associated condition.
Green grams also has a lot of antioxidants which regulating the level of cholesterol by eliminating the free radicals, reducing inflammation and repairing the damages caused to the blood vessels, so it preventing the strokes and heart attack. Green gram also helps in enhancing the blood circulation by clearing out the arteries.
MAIN THING: Green gram include in a diet may decrease the risk of heart diseases also help prevent obesity, high cholesterol, hypertension, inflammation and oxidative stress, prevention against atherosclerosis, plaque, etc.

Green gram is rich in fiber, folate, B vitamins and protein, which help in reducing inflammation. They also contain phytonutrients called isoflavones that have powerful antioxidant properties and help in boosting immunity.
Green gram is also an excellent source of iron, zinc and vitamin B6, which all are associated with improving the immune system. All these nutrients help in increasing the number of white blood cells, which in turn helps in defending the body against the attack of the disease. Green gram is rich with threonine which may boost the immune system by enhancing the antibodies production. The threonine produces the serine and glycine which is essential for the collagen, muscle tissue and elastin production. So it makes healthy and strong connective muscles and tissues by increasing the production of serine and glycine.
Green gram has many antioxidants which give protection aginst chronic illnesses. The antioxidants found in green gram which neutralize free radicals within the body, which cause chronic illness and cellular mutation. Vitamin C found in green gram is enough to give a boost to the immune system.
MAIN THING: Green gram included in your diet may help to improve your immunity due presence of immunity booster nutrients in it.

Green gram is a great source of amino acids. The high amount of amino acids like oligosaccharides and polyphenols preventing the onset of cancer. the antioxidant property of the moong beans is beneficial in protecting the body from DNA damage and dangerous cell mutation.
It also has antitumor properties. The flavonoids vitexin and isovitexin have a free-radical destroying ability, which contributes toward lowering the oxidative stress which can cause the development of cancer.
MAIN THING: Rich source of amino acids and flavonoids in green gram poses anti-tumor properties may lower the risk of cancer.

Green gram has a high density of nutrients, combined with dietary fiber, are perfect for people trying to lose weight. Dietary fibers of red lentils are functioned as "bulking agents" in the digestive system and increase satiety and reduce appetite and making people feel fuller for longer and so lowering overall calorie intake which are helpful in reducing obesity.
Dietary fiber helps the body feel full for longer, by increases the satiety hormone called cholecystokinin and can fighting with obesity.
Increasing consumption of plant foods like green gram decreases the risk of obesity, overall mortality, diabetes, heart disease, increased energy and overall lower weight.
MAIN THING: High fibers and protein content in green gram with low calories may help to reduce your weight.

Vitamin B complex in green grams such as vitamin B6 plays a most important role in controlling hormone fluctuations especially in the women who at menopausal age. And gives relies on postmenopausal syndromes such as managing cramps, headaches, mood swings, fatigue, and muscle aches.
Folate in green gram may reduce the risk of neural tube defects, autism, stroke and heart disease in pregnant women.
Thiamin plays a principal role in the growth and development of the fetus as well as the mother. Thiamin is a water-soluble vitamin which protects against metabolic problems which affect the placenta and fetus during pregnancy so it made a healthy environment for fetus and mother.
Riboflavin is abundant in green gram is essential for pregnant women. It prevents a condition such as pre-eclampsia.
Green gram is also a good source of calcium. It prevents osteoporosis in an old aged ladies.
MAIN THING: Regular consumption of green gram in food amount has significant effect on women health.

Green gram may help to prevent liver damage and reduce fat accumulation in the liver while increasing cholesterol excretion because mung beans exhibit hepatoprotective effects.
Green gram is rich source of proteins, which are essential for muscles and bone health but it also has liver protectant activity.
MAIN THING: Regular intake of green gram may help to improve your liver health.

Gas and flatulence: An excessive intake of green gram can produce digestive disturbance like stomach aches, diarrhea, gas, flatulence etc.
Allergy: if someone suffering from allergic to the green gram does not consume because it can be fatal.

Select moong or moong dal that is dry, firm, clean and shriveled. The color of the green gram choose is green.

Store green gram in a sealed package or airtight container in a cool, dry, dark place.
Cooked moong dal or moong may be refrigerated up to one week in a sealed container. Cooked moong may also be frozen up to six months.
favorite_border 60 Thanks
bookmark_border Bookmark