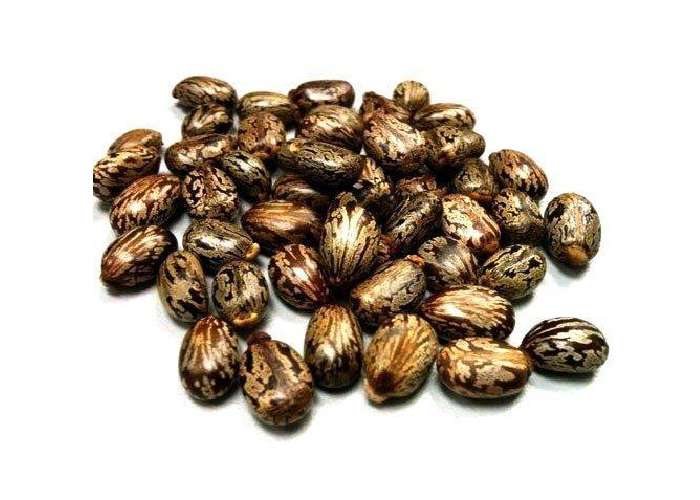 For a healthy body for you and me eating castor seed is key
Castor seeds are obtained from the castor plant. The seed is encased in an outer covering which contains a fatal poison known as ricin, and can only be used once the hull is removed. Castor seeds have been used as one of the chief ingredients in a wide variety of medicines.
Castor seeds are found to be rich in oleic acids, ricinoleic acids and linoleic acid with other fatty acids. Castor seeds are also rich in proteins, carbohydrates and calcium. Castor seeds also are rich in triglyceride.
Castor seed is extensively used as a purgative, treatment for a cough, cold, fever, worm troubles and skin diseases.
The benefits of castor oil include boosting immunity, skin and hair care and relieving rheumatism, menstrual disorders and constipation.
Botanical Name: Ricinus communis
Castor seeds have been found in Egyptian tombs and pyramids. It has been traditionally used as burning oil, body and hair oil. The use of castor bean oil goes back 4000 years ago. It is used in the manufacture of soaps, cosmetics and cocoa butter.
The origins of the plant can be found in East Africa. Over the years, the Indian Subcontinent and the Mediterranean Sea are found to be the two extensive sources of the castor plant.
The varieties of castor which depending upon colour of the stem and branches, habit of plant, the nature of capsule, duration, the size of seeds and oil content. In India varieties like, NPH 1, GAUCH 4, YRCH 1, TMV 5, TMV 6, CO 1 and TMVCH. 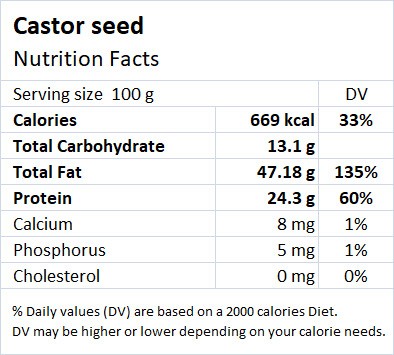 Castor seed oil has ricinoleic acid which is helpful in improving the strength of the lymphatic system of the body. When the lymphatic system is good and healthy it also improves circulation all over the body.
Castor seed oil also enhances the quality of white blood cells that causes it to fight with the disease agent and keep the body healthy and also helps to detoxify the body by bringing oxygen to cells.
MAIN THING: Castor seed oil has ricinoleic acid It helps in promoting circulation from the heart to the rest of the body through small capillaries and arteries.

Castor seed oil is rich in fatty acids that work as an excellent moisturizer for the skin. Castor seed oil can help in hydrating skin and in removing dry patches with eradicating different skin problems. Castor seed oil goes into pores of the skin and stimulating the production of elastin and collagen.
It helps in reducing acne because it is a rich source of ricinoleic acid, which helps in fighting off the bacteria that cause acne. It repairs the tissues and eliminates scar and marks, making skin soft, smooth and beautiful.
Castor oil is also used in burns and wounds because it gives protection from infections.
MAIN THING: Castor seed oil rich in fatty acids, undecylenic acid, which has germicidal and disinfectant properties. It is useful for treating skin diseases and skin ulcers, particularly those which are caused due to bacterial or fungal infections like athlete’s foot, warts, itching, moles, cysts and ringworm.

Castor seed has anti-inflammatory properties. So it helps in reducing pain and swelling on affected parts. Arthritis is a highly painful disease for bones and joints and extreme levels of pain are relieved by the application and massaging of castor seed oil. Castor seeds can be used to provide relief from nerve inflammations, sore muscles, joint pains and all the other results of arthritis.
Rheumatism of joint and muscle can treat by application of castor seed oil because it contains oleic acids, ricinoleic acids, linoleic acids, and other fatty acids that all are extremely effective in treating ailments related to rheumatism.
MAIN THING: Castor seed oil is also really effective in treating gout, it can help in reducing pain, burning sensation and sudden swelling up of joints.

Pregnancy: excessive use of castor seed oil may produce abortion and it can also cause excessive pelvic contractions which can lead to a miscarriage or premature delivery. So take in a low amount is safe and healthy for pregnant women.
Skin: The skin can sometimes break out when exposed to castor oil as the concentration of chemicals in castor oil make it dangerous.
Stomach troubles: it can also produce dehydration, diarrhea, nausea, cramping, etc.

Dried castor seeds are generally available in pre-packaged containers as well as bulk bins. Just as with any other food that purchases in the bulk section, make sure the bins are covered and that the store has a good product turnover rate.
Whether purchasing castor seed in bulk or in a packaged container, make sure there is no evidence of moisture or insect damage and that the beans are whole and not cracked.

Store dried castor seed in an airtight container in a cool, dry and dark place where they will keep for up to 12 months.
favorite_border 109 Thanks
bookmark_border Bookmark