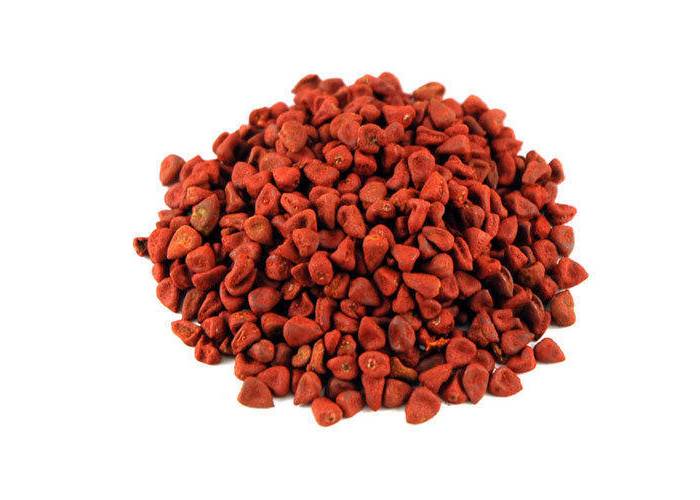 Get achievement with annatto because good health is biggest achievement
Annatto is a plant that seed and leaf are used to make medicine. Other common names for Annatto are Achiote, Annatto, Urucum, Lipstick Plant, Coloral, Arnatto, Lipstick tree, Bija, Mugo-simu, Ocotillo, Onoto, and Orleansstrauch.
Annatto is a natural colour and spice which is derived from achiote shrub which is evergreen and tall and is originated from the Tropical region of America. This plant does well in subtropical to tropical climates with moderately fertile soil. It has bright flowers which range from white to pink in colour.
The most impressive health benefits of annatto include its ability to promote healthy digestion, strengthen bones, prevent diabetes, prevent neural tube defects, promote healing, lower fevers, boost eye health, eliminate headaches, reduce nausea and protect respiratory distress.
Annatto is also used topically on the affected areas to treat burns and vaginal infections and to repel insects.
Botanical Name: Bixa orellana
The tree of annatto was originated from Brazil. It was used for ritual as well as elegant body painting, insect repellent, sunscreen and medical purposes. In the 16th century, it is used for Mexican manuscript painting.
It is also widely cultivated in Tropical countries such as Mexico, Peru, Indonesia, Ecuador, Kenya, India, and East Africa. Traditionally, Annatto is used as flavouring and colouring agent in the Caribbean, Latin America and other countries in the 16th centuries which are taken by Portuguese and Spanish explorers. 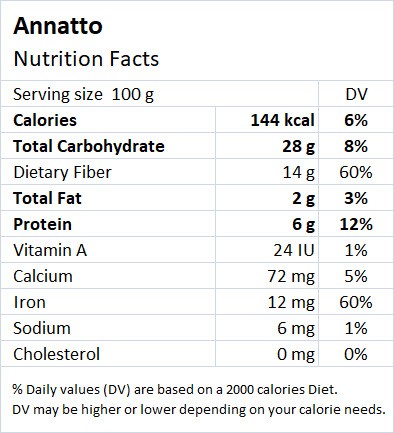 Annatto seeds have a high concentration of fiber and the leaves of Annatto are helpful for human digestion. Annatto contains lots of dietary fibers that promote the smooth passage of food from the digestive system.
Annatto is used in case of stomach-ache and treats discomfort and heartburn. It is also used for viral infections.
These advantages help make annatto seeds the right selection to increase healthy absorption and avoid constipation. So annatto makes the whole body healthy by keeping the digestive system healthy.
MAIN THING: High fiber contain in annatto seeds help to improve your digestion.

The reddish colour and the complexion extracted of annatto is red because of the carotenoids contained in those seeds. Annatto is rich in carotenoid which is the reason for the pigment extraction. So carotenoid will act as antioxidants in the visionary system and avoid the growth of cataracts, while also preventing macular degeneration, regulating vision to always be fresh for years.
MAIN THING: The high carotenoid content, present in annatto, functions as antioxidants in ocular system and prevent the development of cataracts, while also staving off macular degeneration, keeping eyes and vision healthy.

Annatto seeds have a rich in antioxidants, just like many similar seeds. Annatto has organic compounds such as tocotrienols that act as antioxidants for the body. It is used as a treatment for skin health and anti-aging solution.
Annatto paste works on the skin and lowers the signs of wrinkles, imperfections and blemishes. It is used to make the skin look young and tighten. It also reduces sun ray exposure damage.
Annatto work as a fast healer. It heals wounds, burns and skin irritation in a few minutes. It speeds up the healing process and lowers the appearance of scars. It also prevents the chances of infections on wounds or cuts because it also has antibacterial properties with antioxidant properties.
Annatto has antimicrobial properties and antioxidant properties and because of that it can kill various pathogens and bacteria in the body and keep body healthy.
MAIN THING: Annatto cream can lower the signs of wrinkles, inflammation and other dark spots also smoothing up the skin and shaping it to look youthful.

Annatto has anti-cancer properties. It has the capacity to preventing cancer.
Norbixin is found in annatto seeds and is known to be a powerful antioxidant. Norbixin has an anti-mutagenic effect on healthy cells exposed to cancerous cells and free radicals, meaning that the seeds may be able to help prevent a variety of different cancers either from formation or from spreading.
One of study suggested that Annatto is a potential alternative to cancer prevention strategies. It can prevent breast cancer in females.
MAIN THING: A compund known as Norbixin found in Annatto seed has anti-cancer and anti-mutagenic effect help to prevent cancer.

Annatto has calcium, phosphorus and manganese. Calcium and phosphorus which is an important mineral to maintain the strength and structure of bones.
Manganese work as a constructor of bones by regulating the enzymes and hormones which are involved in the process of bone metabolism.
Phosphorus assists in the mineral density of bones. So for healthy bones, it is a must to balance the calcium and phosphorus and manganese level.
MAIN THING: Annatto provides the mineral density and also promotes the strength and durability of bones. It prevents the chances of osteoporosis with essential minerals such as calcium.

Annatto content work as a detoxificant agent with antioxidant properties as well as anti-inflammatory properties. Annatto seeds help in balance, detoxify, metabolize, and strengthen the liver. It also helps to reduce liver inflammation. It also removes free radicals which are the reason for cancer.
MAIN THING: Nutrients found in annatto seed has liver protectant properties help to improve your liver functionality

Annatto is herbal remedies for gonorrhoea. So it is used in a painful and dangerous condition, applying annatto cream either internally or externally can be very efficient for treating those typical diseases.
MAIN THING: Use of annatto cream help to treat the gonorrhoea.

Allergies: People who are hypersensitive may show allergic reactions to annatto, some may even suffer from anaphylaxis. So avoid use in case you are allergic to it.
Irritable bowel syndrome: People suffering from irritable bowel syndrome may worsen their conditions if they consume annatto.
Surgery: Annatto might affect blood sugar levels. It produces interfere with blood sugar levels after or during surgery. Stop using annatto as a medicine at least 2 weeks before a scheduled surgery.